I just came across the first Moleskine I ever owned. It's a black pocket ruled notebook and I bought it in 2005. Up until then I'd used spiral bound notebooks from Smiths. I don't know why or how I moved onto Moleskine but, and this will come as no surprise to those who know me, I haven't looked back since. 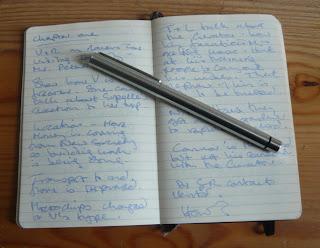 But it's so exciting looking back at the things I was writing and plotting and planning at the time. I was in the middle of writing a distopian novel - I was ahead of the game! - which actually looks rather good. Obviously there had been massive climate change which meant society had become completely divided with the rich, naturally, taking the upper hand. And of course I had a serial killer. I also had notes for a story about someone called Tirion (long before Game of Thrones), who I think I planned to turn into a star. Yes, the astral kind.

I've got lists of agents to submit to. Only one of them was interested, I seem to remember, and not all that much, sadly.

I've got lists of titles. The distopian ended up being called Ripped Apart, for what it's worth. I've got lists of characters. I have no idea who Connor Mullen or Bridget Rossini were going to be. Or Gabriel Beaumont.

I've got notes from a SCBWI event, which was at Sara Grant's house, with the publicity people from Penguin, I think. Kirsten and Adele?

I've got notes for a story set on Easter Island, which never got written. There's a short story called The Unseen which I enjoyed writing more than people enjoyed reading. There's a bit of flash fiction that I put on Write Words, which was really good fun. And there's the start of the sequel to Ripped Apart, which was a bit ambitious seeing as no one wanted the first one.

It's great to look back to see the energy and enthusiasm I hope I can still muster. I can see just how much my writing has improved over the years but there are still a few gems there; some well-rounded characters, exciting story ideas, and even some rather good dialogue. I'm tempted to sit down and read through all my notebooks but time has taught me that it would be a form of procrastination. I'll save them for another day.
Posted by Unknown at 17:40