What Is It About Highwaymen?

Why do we have a thing about highwaymen? Because we do, don't we? (And I bet you're now singing the Adam Ant song, Stand and Deliver!) The protagonist in the novel I'm currently writing is a part-time highwayman, and somehow this gives him a sort of glamour, an air of mystery, even a smidgen of romance. But, really, they weren't all that great. Nevermind 'Gentlemen of the Road', they were just thieves; and violent and aggressive ones to boot. This video, recently posted by Marie-Louise Jensen on Facebook, really made me laugh.

But the reason I decided to have a highwayman in my story was because I read about Claude du Vall. With my love of the restoration period, he had to be my highwayman of choice. He was dashing and fashionable, everything you need in such a man, and, allegedly, never resorted to violence. But what really made me warm to him was the fact that he agreed not to take everything from one of his victims if the man's wife agreed to dance with him. Here he is at that very moment. (You wonder why they didn't just shoot him while he was dancing?) 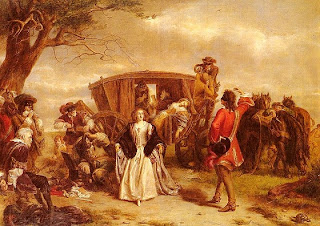 So, back to my original question - why do we love highwaymen so much? I can't think it was any fun being held up at gunpoint and being forced to hand over your valuables. And I bet most of them were not dashing and handsome and glamorous. Maybe the myth has built over time. Or maybe the women of the time revered them too. Claude du Vall was eventually arrested in a pub in Covent Garden, was tried for six robberies and hanged. I leave you with his memorial inscription, which perhaps says it all.

Here lies DuVall: Reder, if male thou art,
Look to thy purse; if female, to thy heart.
Much havoc has he made of both; for all
Men he made to stand, and women he made to fall
The second Conqueror of the Norman race,
Knights to his arm did yield, and ladies to his face.
Old Tyburn’s glory; England’s illustrious Thief,
Du Vall, the ladies’ joy; Du Vall, the ladies’ grief.

Oh, and if anyone fancies seeing him, he haunts the Holt Hotel on the Oxford Road.